A group of Winnipeggers are organizing to support postal workers as Canada Post management attempt to dismantle the postal service.

People for Posties-Winnipeg is an ad hoc group aiming to support postal workers if they get locked out from their workplace this weekend.

People for Posties-Winnipeg will be pushing a national campaign called Delivering Community Power, which calls for the conversion of postal offices into zero carbon emission centres across the country. 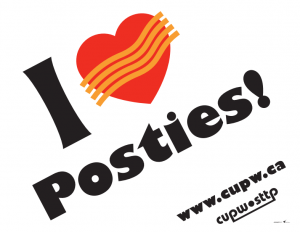 There are twice as many post offices as there are Tim Hortons, which could all be converted into post offices that also serve as community banks, affordable food delivery centres and allow for postal workers to check in on senior citizens in urban and remote areas.

In the face of this visionary proposal, Canada Post management are refusing wage parity between city and rural postal workers and the restoration of door-to-door mail delivery.

Canada Post management are in contract negotiations with the Canadian Union of Postal Workers as their contract is set to expire this Saturday, July 2.

Solidarity Winnipeg members also voted to “actively organize with members and the public in support of postal workers during the public review of Canada Post and the impending lockout of CUPW members.”

“There is a strategic need to connect environmental issues with social justice and inequality that is consistent with Solidarity Winnipeg’s principles and desire to implement the Leap Manifesto,” stated the motion.

This piece was published by a member of Solidarity Winnipeg communications committee and does not necessarily reflect the views of the organization.